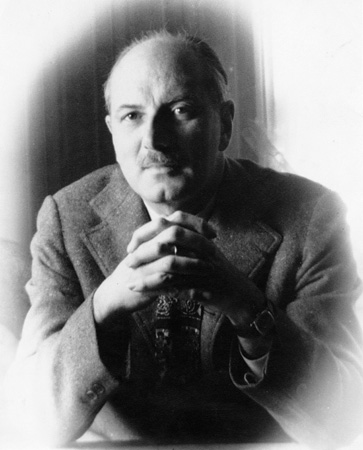 Check back later this fall.

Monmouth University Library houses the personal library of dynamic American writer, literary critic, eminent moralist, architectural critic, historian and philosopher, Lewis Mumford. Born in Flushing, NY, on October 19, 1895, Mumford’s extensive contributions to literary scholarship, technology, urban planning, and architecture are globally recognized for their uncanny prescience and social vision. Mumford, a strong humanist, criticized progress based on the intoxicating power of technology and the machine. Instead, Mumford argued, civilization, and its advancement, should be cultivated by language and humanism, and that technology should serve only the betterment of people, rather than to acquire global domination, promote military prowess, or erode individualism. He saw the automobile as a dangerous product that harms the environment and pollutes and congests our cities, and he warned about our ultimate dependence on foreign oil.

Yet Lewis Mumford was no pacifist—he despised fascism and urged America to fight in both World Wars, but did not support the war in Vietnam. He was, however, no champion of liberalism. Like George Orwell, he accused liberal contemporaries of being corrupt, and claimed that their “willingness to submit to the Nazis rather than risk the need for using force in opposing them” was, in the main, disturbing and repellant. Lewis Mumford joined the US Navy during World War I as a radio operator. During World War II he suffered great tragedy when his son was killed fighting in Italy. His many prestigious awards include the Medal of Freedom from President Lyndon Johnson, the Presidential Medal of Art and Citation from Ronald Reagan, and the Knight of the British Empire (K.B.E), an honor bestowed on him by Queen Elizabeth II. These achievements are all the more remarkable when we consider that Lewis Mumford did not take an academic degree from any university.