Monmouth County, 9/11, and Its Aftermath 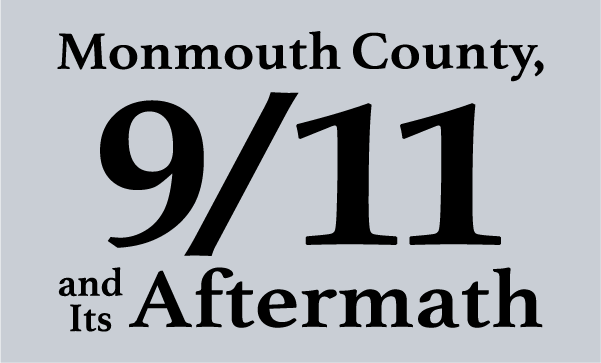 Welcome to the digital companion to the exhibit, Monmouth County, 9/11, and Its Aftermath.

The physical exhibit traces its roots to September 2019, when Monmouth County Historical Association (MCHA) President Linda Bricker invited Professor Melissa Ziobro of the Department of History and Anthropology at Monmouth University to guest curate an exhibit for the 20th anniversary of the September 11, 2001 terrorist attacks.

The exhibit, which will be open from September 11 - November 11, 2021 at the MCHA's Taylor-Butler house in Middletown, honors the 147 members of the Monmouth County community who lost their lives that day. In addition, the project pays tribute to the strength and resiliency exhibited by the citizens of Monmouth County as they joined together to serve the nation, mourn, and heal in the tragedy’s aftermath. The exhibit also encourages us to revisit the questions we all asked ourselves in the aftermath of 9/11: how do we balance freedom and national security? How well-functioning, transparent, and accountable is our government? What does it mean to be a patriot? What is America's place in the world?

For additional details on the physical exhibit, visit our Monmouth County Historical Association partners at www.monmouthhistory.org.

This page will be updated frequently throughout the Fall of 2021, so we encourage you to visit us again soon.

We are honored to have the following individuals serve on the exhibit's advisory committee: