Monmouth University Library's fine special collections reading room is open to anyone with an interest or passion for rare works.  Throughout the semester, presentations and instructional sessions are offered on medieval manuscripts, the hand press period, and the history of the book. To schedule a personal or class visit, contact special collections librarian George Germek at 732-571-4403. Or, alternatively, you can send an email to ggermek@monmouth.edu

The purpose of this LibGuide is to inform students not only about the collections at Monmouth University's Guggenheim Memorial Library, but also of medieval manuscripts in general.

What is a manuscript? It's a book (or sometimes called a codex) that is written and produced ONLY by hand. "Books," as we know them today, really developed after the invention the printing press. Therefore, what resembled our common"book" format prior to the age of the printing press (15th century) are technically considered codicies (plural) or a codex (singular); medieval manuscripts fall into that description, and are well represented in this guide. Scroll down, or just use the Quick Links to your left.

The Guggenheim Memorial Library contains over 60 detached Medieval leaves that you are welcome to examine in our Special Collections Reading Room. Just call and make an appointment!

An antiphonal, also called antiphoner or antiphonary, contains the sung portions of the DIVINE OFFICE. Such books are often large in format, so that they could be used by a choir, and include DECORATED and HISTORIATED INITIALS, depicting saints and key events of the liturgical year. Hymns are usually contained in a separate volume.

Originally, the antiphonal may have included chants sung in the MASS, but its use became restricted to the DIVINE OFFICE during the CAROLINGIAN period, and the GRADUAL became the principal CHOIR BOOK for the mass. The contents of the antiphonal are generally arranged in accordance with the TEMPORALE, SANCTORALE, and Common of Saints in liturgical order. 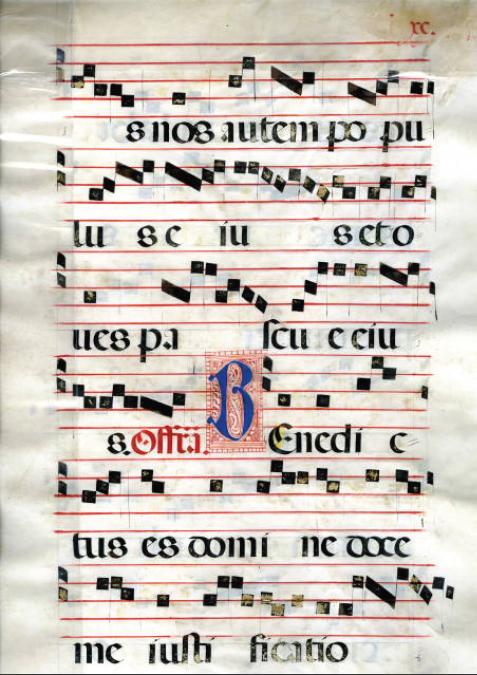 A number of Latin versions of books of the Bible, translated from Greek and Hebrew, were used in the EARLY CHRISTIAN Church; these are known as Old Latin versions. To establish a measure of uniformity among these various translations, Saint Jerome, encouraged by Pope Damasus I, undertook a new translation of the whole Bible, working from the Greek and the Hebrew for the Old Testament. The translation he produced, begun about 382 and completed in 404 is known as the Vulgate. The work went through several stages, including three versions of the Psalms (Roman, Gallican, and Hebrew). Throughout the Middle Ages it was common for books of the Bible to be contained in separate volumes (such as the PENTATEUCH, HEXATEUCH, OCTATEUCH, or the Gospels). For liturgical purposes, scriptural texts (or readings from them) were often incorporated into SERVICE BOOKS (such as EVANGELARIES, EPISTOLARIES, and PSALTERS).

Beginning in the fourth century, when Christianity gradually became the official religion of the Roman Empire, luxurious CODICES were produced, among them the Codex Sinaiticus and the Cotton Genesis. During the early Middle Ages, corruptions of the Vulgate and intrusions from Old Latin versions led several scholars to attempt to standardize the biblical texts; Cassiodorus in the sixth century and, in the CAROLINGIAN period, Alcuin of York, Theodulf of Orléans, and Hartmut of St. Gall are the best known of these. As a result of their endeavours, a group of large, luxuriously written and illuminated editions of the complete Bible were produced. Cassiodorus' nine-volume edition influenced Bible manuscripts in ANGLO-SAXON England, such as the Codex Amiatinus, and in the ninth century Alcuin's SCRIPTORIUM at Tours went on to produce a whole series of Bibles for circulation. During the ROMANESQUE period, many of the Bibles produced were large in format. In the late twelfth and thirteenth centuries, a practice arose, stimulated by the universities, of producing small-format Bibles (or parts thereof) with condensed SCRIPT and HISTORIATED INITIALS, often accompanied by GLOSSES. Many of these were made quite cheaply.

Scriptural texts were translated into the VERNACULAR as early as the eighth century (in Anglo-Saxon England), generally as glosses, but many of the major developments in vernacular translation took place from the fourteenth to the sixteenth century, beginning with John Wycliffe, who made the first complete translation of the Bible into English; the German translation made by Martin Luther in the 1520s is still in use today. 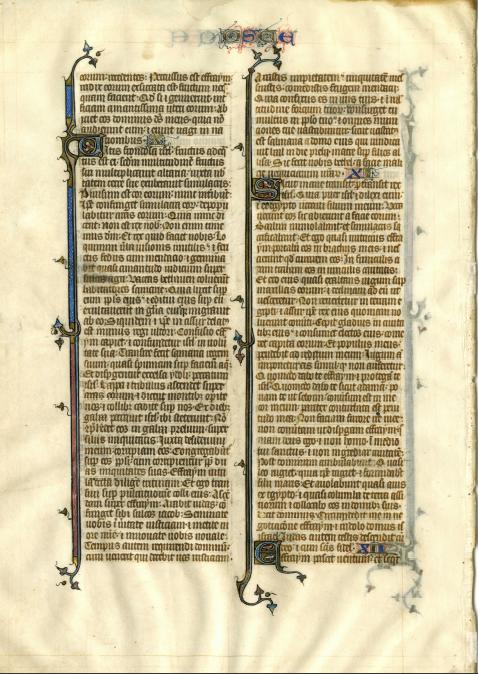 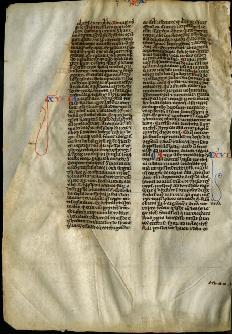 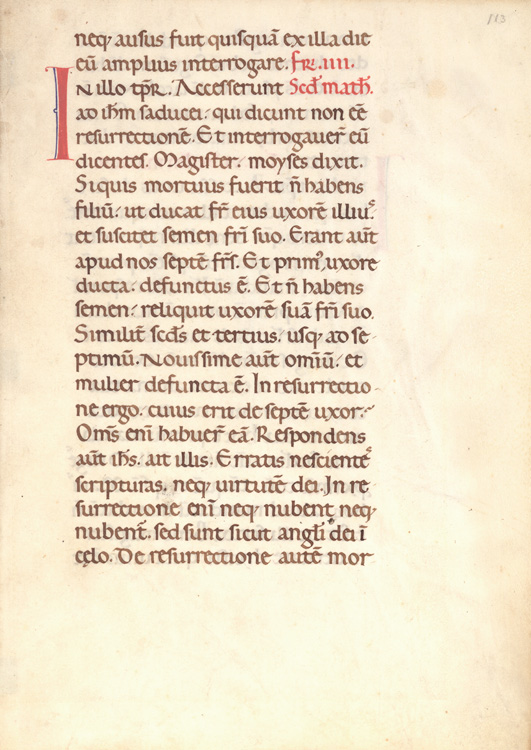 A book, also called a primer or horae, for use in private devotions. Its central text, the Little Office of the Blessed Virgin (or Hours of the Virgin), is modelled on the DIVINE OFFICE and represents a shorter version of the devotions performed at the eight canonical hours. The text, known from the tenth century, was originally read only by ecclesiastics; it entered into more popular use by the end of the twelfth century, often being attached to the PSALTER, the book more commonly used for private devotions before the emergence of the book of hours. The private recitation of the Little Office of the Virgin is an expression of the LAY person's desire to imitate the prayer-life of the religious.

The Little Office of the Virgin gradually acquired other elements: a liturgical CALENDAR, a LITANY OF THE SAINTS, SUFFRAGES, the Office of the Dead (which had emerged by the ninth century), the Penitential Psalms (Psalms 6, 31, 37, 50, 101, 129, and 142, which were first included in books of hours in the thirteenth century), the Gradual Psalms (Psalms 119-133), and prayers. Additional offices, such as the Short Office of the Cross, Hours of the Holy Spirit, Hours of the Trinity, and Hours of the Passion, could also form part of a book of hours. The book of hours took its standard form in the thirteenth century and continued in general use until the sixteenth century, enjoying particular popularity in France and Flanders. The texts of books of hours vary slightly in accordance with USE.

Books of hours were medieval best-sellers and have survived in relatively high quantity. They are nearly always illuminated, in a manner commensurate with the PATRON'S budget, and often contain a MINIATURE or set of miniatures for each major textual division. These subjects include scenes from the life of the Virgin, Christ, and King David, depictions of the saints and themes relating to death and judgment. The patron was also sometimes portrayed. Decorated letters as well as images can be found in books of hours. 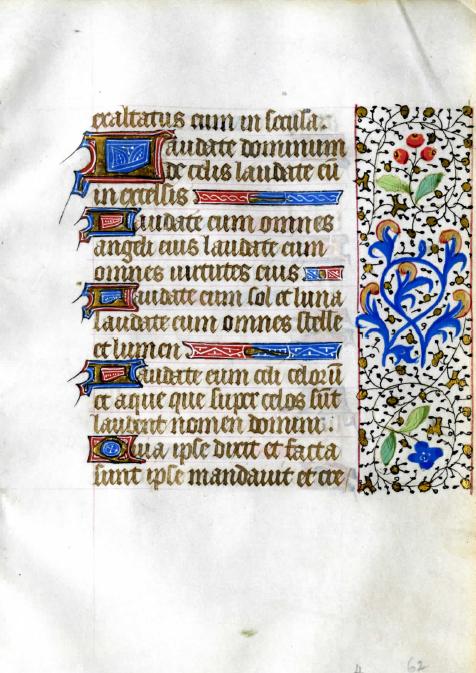 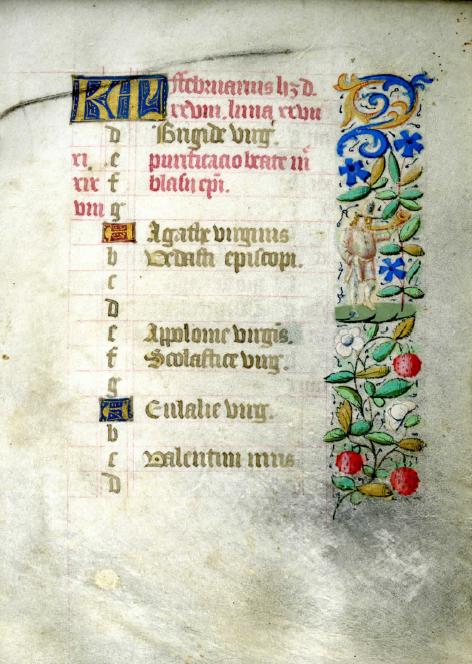 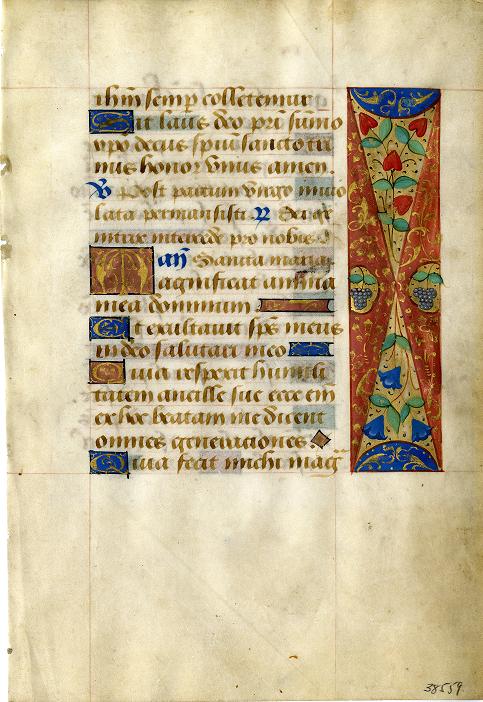 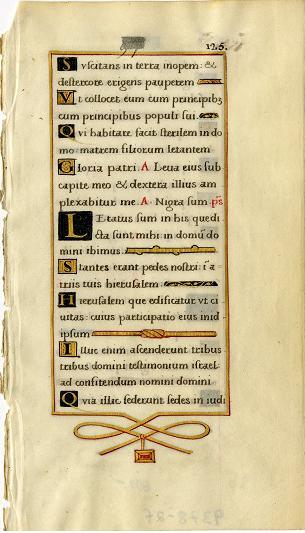 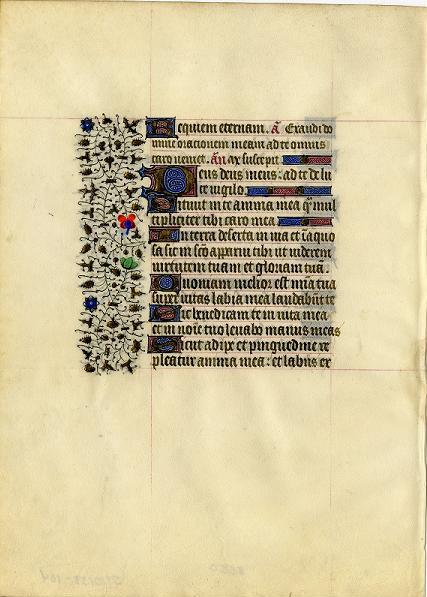 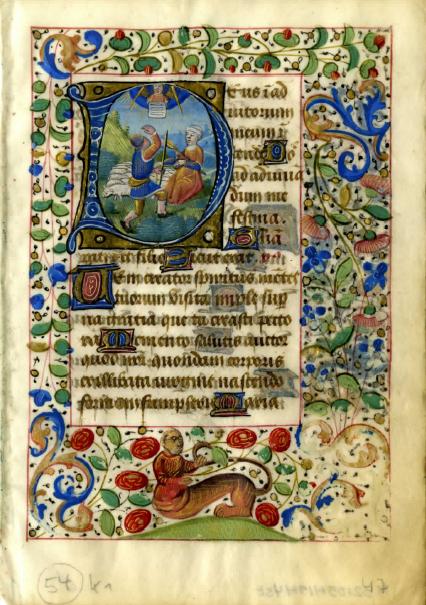 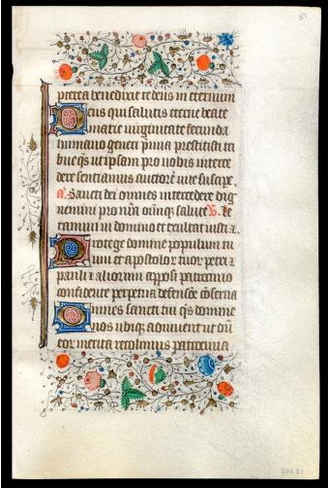 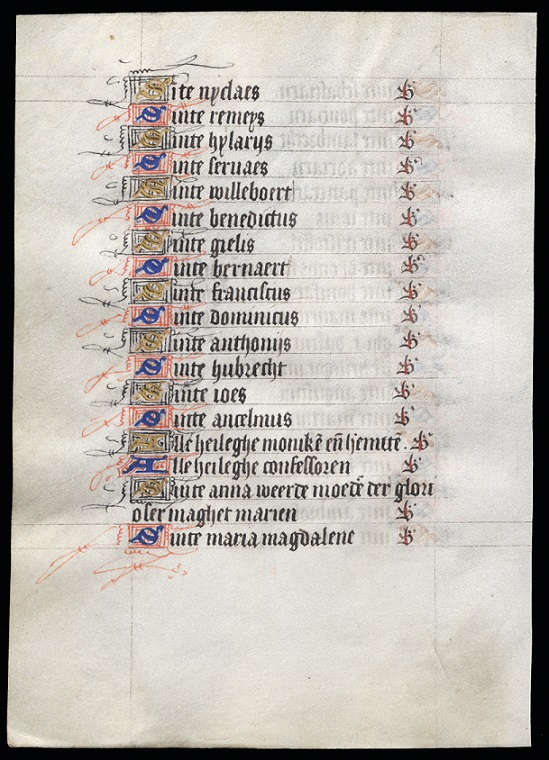 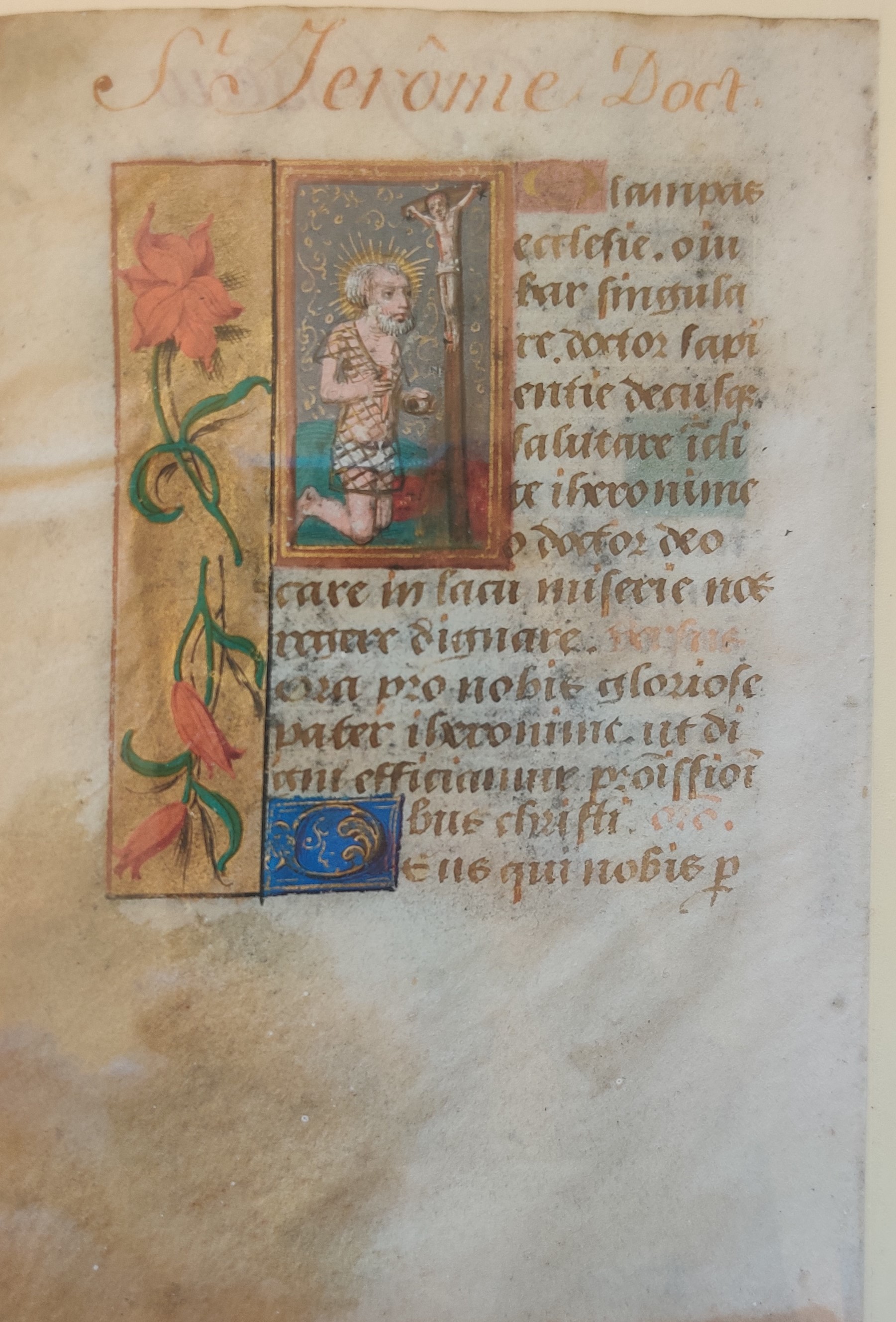 A SERVICE BOOK containing the texts necessary for the celebration of the DIVINE OFFICE. A breviary is often adorned with DECORATED or HISTORIATED INITIALS, and more luxurious copies may contain MINIATURES depicting biblical scenes or the performance of the office.

From the eleventh century on, the various volumes used during the Divine Office (PSALTER, ANTIPHONAL, LECTIONARY, COLLECTAR, MARTYROLOGY, and others) were combined to form the breviary, which was initially only used by monks, but was popularized (in slightly abridged form) by the Dominicans and Franciscans in the thirteenth century. The breviary's contents were divided into TEMPORALE, SANCTORALE, and Common of Saints. All members of monastic orders and the clergy in major orders are committed to the daily recitation of the breviary. The contents vary in detail in accordance with the rite of the religious order or the USE of the geographic area.

A gradual is the response and versicle to the Epistle reading that constitutes one part of the MASS. The name derives from the practice of singing the gradual on the steps of the raised pulpit. More commonly, however, the term refers to the principal CHOIR BOOK used in the mass. Arranged according to the liturgical year (with TEMPORALE, SANCTORALE, and Common of Saints), a gradual contains (in addition to the graduals themselves) introits, tracts, alleluias, offertories, and communions. The introits - the first sung elements of the mass - were often introduced by HISTORIATED INITIALS (Ad te levavi, the introit for the first Sunday in Advent, being the most elaborate). For low mass, the contents of the gradual were included in the MISSAL and performed by the celebrant rather than the choir. 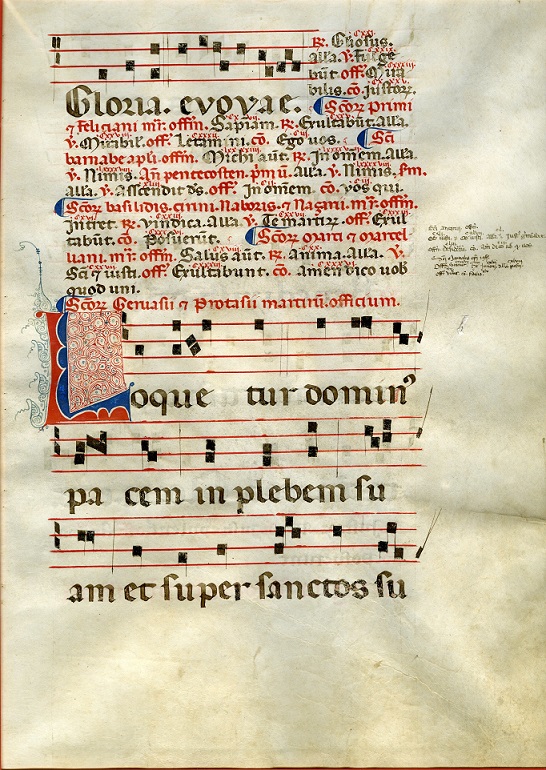 Printed Books of Hours were  considered mass-produced originals. Despite their reliance on mechanical reproduction, they were nonetheless personalized objects that required the hand of a scribe or illuminator to be complete, giving each one an individualized quality. 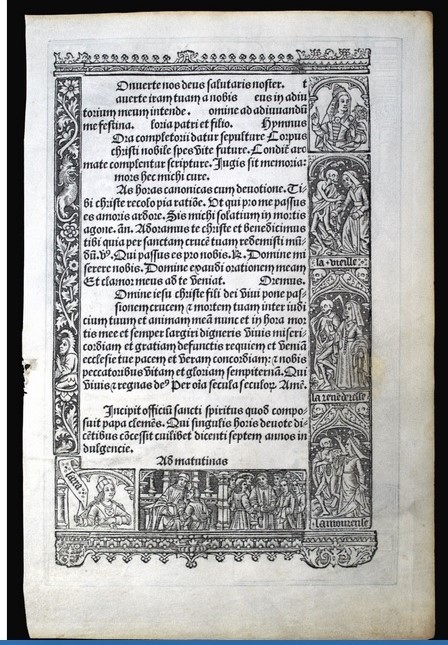 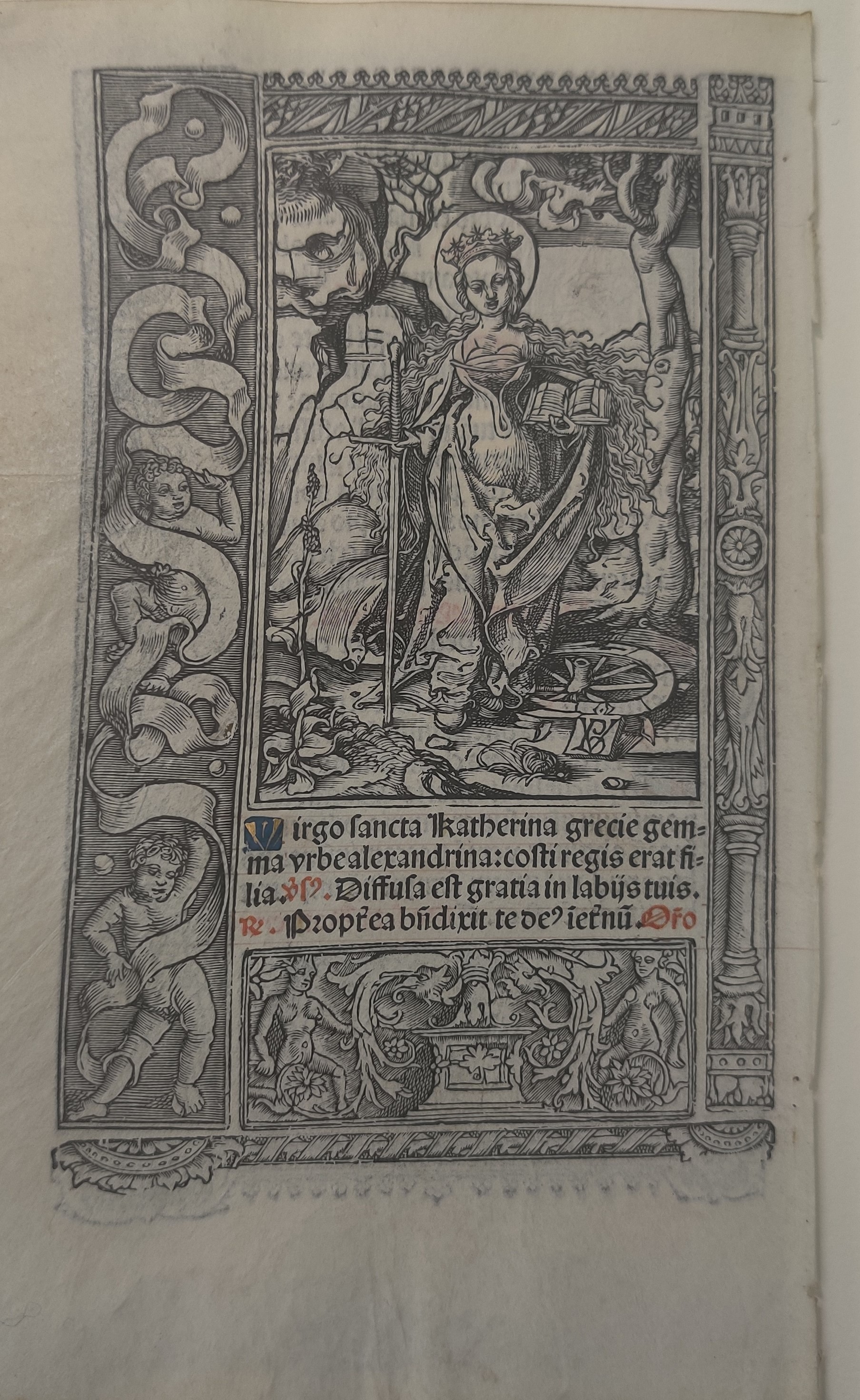 The psalter is the Book of Psalms. Medieval manuscripts of the Psalms were used in liturgical as well as private devotional contexts and often contained ancillary texts such as a CALENDAR, Canticles, creeds, a LITANY OF THE SAINTS, and prayers.

Psalters designed for use in the performance of the DIVINE OFFICE often contain other relevant texts, such as the Hours of the Virgin. The psalter was the principal book for private devotions before the emergence of the BOOK OF HOURS in the thirteenth century. The Psalms also formed a major part of many medieval PRAYER BOOKS from the ninth century on. In the non-monastic Roman LITURGY of the Middle Ages, all one hundred and fifty Psalms were recited each week, the majority at matins and vespers. The cycle began at matins on Sunday with Psalm 1 and continued at matins on the following days: Psalm 26 was the first recited on Monday, Psalm 38 the first on Tuesday, Psalm 52 the first on Wednesday, Psalm 68 the first on Thursday, Psalm 80 the first on Friday, Psalm 97 the first on Saturday. The cycle for vespers commenced on Sunday with Psalm 109 and continued throughout the week with the remaining Psalms (some Psalms were set aside for other hours). Other divisions of the Psalms are occasionally found, such as the Irish division of the three fifties (beginning at Psalms 1, 51, and 101). Such divisions would often be given prominence within the decorative program.

Depictions of King David, author of many of the Psalms, frequently introduce the psalter (especially as historiated Beatus initials to Psalm 1), and PREFATORY CYCLES were often added, along with an illuminated calendar. BYZANTINE psalter illustration exerted an important influence on the West. 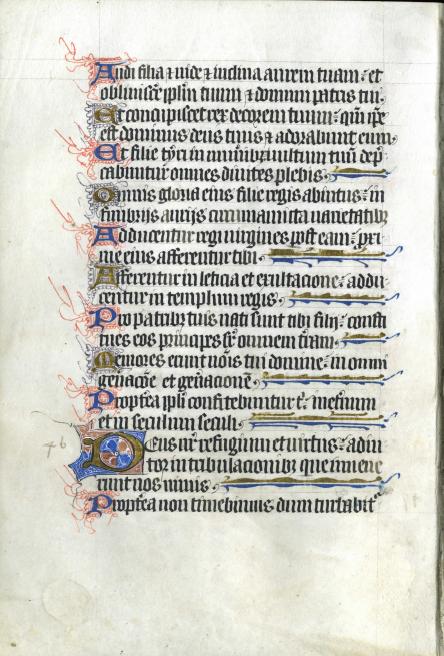 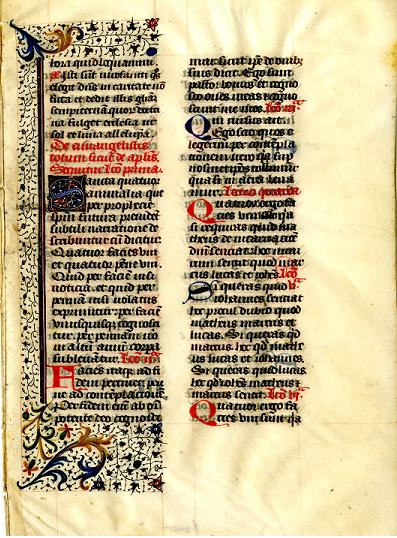 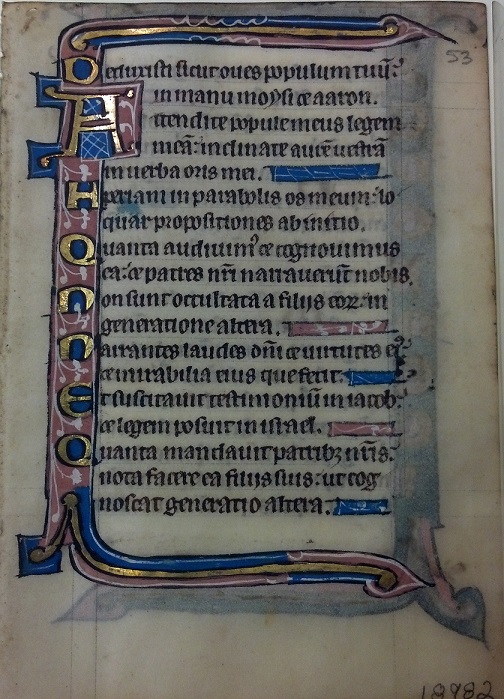 Collections of prayers for private devotional use appeared at least as early as the eighth century in the INSULAR world and shortly thereafter in the CAROLINGIAN Empire. In ninth-century English illuminated manuscripts, prayers began to be collected according to central devotional themes and were often accompanied by passages from the Gospels and the Psalms. Within the Carolingian and OTTONIAN milieux, series of prayers were often appended to PSALTERS, but without a thematic structure. Throughout the Middle Ages, prayer books supplemented the psalter and the BOOK OF HOURS as volumes for devotional use. Prayer books grew in popularity during the later Middle Ages, a number containing fine ILLUMINATIONS having been produced for aristocratic PATRONS (such as Charles the Bold, Duke of Burgundy) in the fifteenth century. 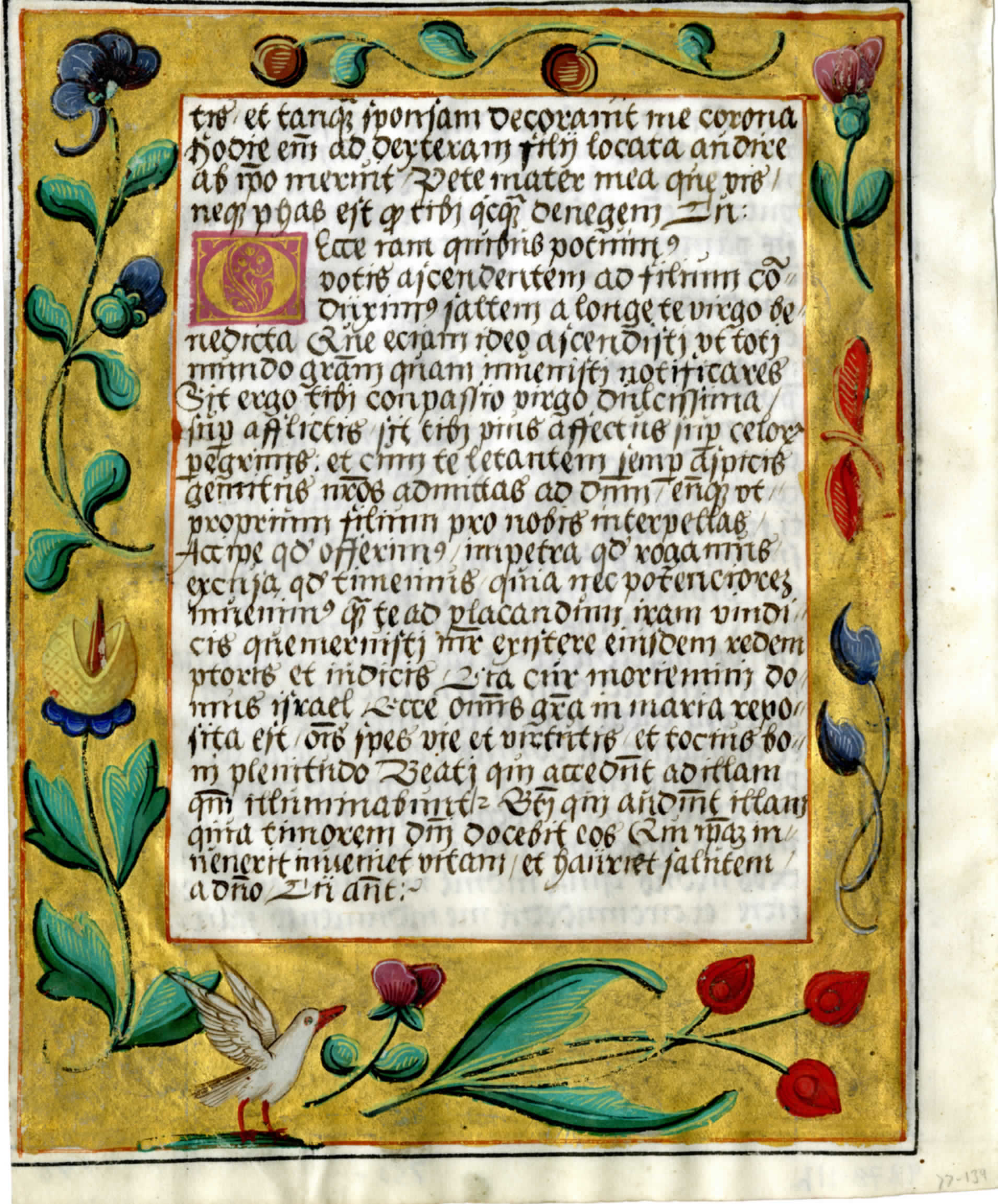